I bought a new laptop a few weeks ago. This time the Lenovo B570 which is pretty similar to the G570 I talked about previously.

I had a new challenge with this one. Fedora 17 would not install with the plan I used with the G570 and Fedora 16.  It insisted on having a GPT labeled hard drive because it detected the laptop's EFI support or something but my first problem was the hard drive didn't have enough unused partitions. Since it was an MBR label there was a max of 7 partitions. Windows took up 2, the Lenovo One Key recovery thing took another primary partition and then there was another driver partition as a logical volume. So no primary partitions for Linux and only 3 extended partions left in the middle of the drive. this is of course after following my old steps to shrink Windows' C: drive and move the start of the extended partitions.

After deleting the driver partition I still couldn't satisfy the Fedora installer so I decided to fix this by converting my MBR labeled hard drive to a GPT label and I didn't want to reinstall Windows either so fixing it's ability to boot was going to need to be figured out.

Converting the drive from MBR to GPT

First, I needed to resize the hidden recovery partition at the end of the drive.  Well I could have just deleted it but I decided not to. Turns out GPT need a little bit of room to store a backup copy of the partition so I used a LiveUSB with Fedora 16, installed gparted, selected that last partition and shrunk it. No big deal. Then for safety I dd'd the first 10 MB of my drive to a file on a usb drive so I might be able to roll back to MBR. I didn't care about any data on the drive so I didn't mind being this reckless. So with the last partition shrunk by 250 MB (excessive I know) and a backup of the MBR (and more since 10MB was excessive too) I proceeded to do the conversion. I had to yum install gdisk because the LiveUSB was missing it but then it was as easy as gdisk /dev/sda and then pressing w to write it. The first time I did it I got a warning (before pressing w) about that last partition being too close to the end.
Quit out of that and done. Well sort of. I still needed to install Fedora 17 which went smoothly this time.

As expected, Windows would not boot anymore. From the GRUB menu I tried the old rootnoverify and chainload to boot to windows but the commands wouldn't work and it seemed to be because the filename format you need to pass to chainload changed by being a GPT drive. I didn't have any idea if that would work anyways and gave up and decided I needed to try to use Windows repair tools to write a new boot record. Turns out I don't have a Windows 7 install disc. The Lenovo recovery media just re-images the drive rather than running Windows 7 and the One Key recovery button was similarly broken. What I did have was a Windows 2011 SBS install disk which was good enough to let me use a command prompt to try to fix it. Between using bootrec /fixboot, bootrec /scanos, and bcdboot d:\windows I was able to get the laptop to offer Windows on the boot menu (F12 at power-on). (And yes it was D:\windows because that's where /scanos found it.)

UPDATE 1: I would recommend you not try this at home. It has issues. One is when Windows Hibernates the system you cannot resume Windows without first booting to Linux and then rebooting if Linux is the default boot target. It skips giving you the option to press F12 for the boot menu. You can't even get into setup. If I can get a clean Lenovo Win 7 Install disc I would probably try reinstalling everything from scratch to see if it fixes things like that. Also, I had no idea what I was doing when I was fixing Window's boot loader with bcdboot so maybe I did it wrongly. The commands had boot in the name and /? showed those options and I just tried them haphazardly. Again I had a full backup of the hard drive so I didn't care about screwing up anything. Actually that's the only issue I've found so maybe it's not such a big deal.

Other update goodness. Fedora 17 KDE is working fairly well. I installed a CAD program and it works well enough when I plug in an external projector however I'm disappointed by the choices of resolution when I try to mirror. It' was a 1080p projector via HDMI so extended desktop works best. 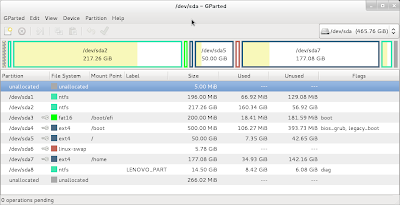